The Bird Life at Runde

There are in excess of 200 bird species that nest on Runde. The most common are gannets, shags, puffins, guillemots, razorbills, kittiwakes, seagulls, fulmars, skua, Gravashelducks, oystercatchers and eider. 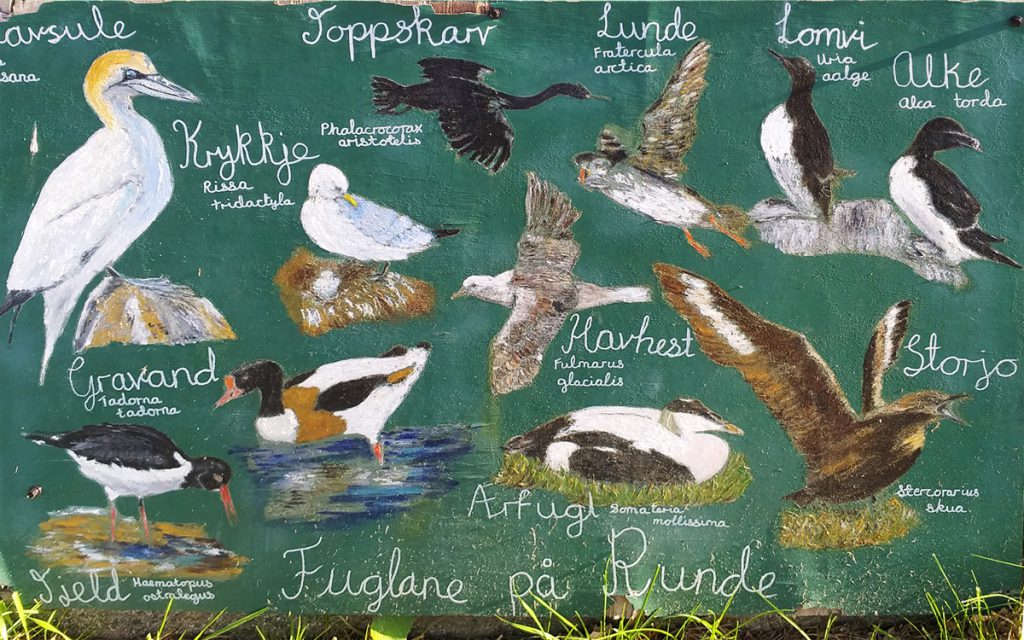 Brief information about the different species 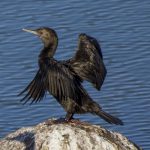 Shags (Phalacrocorax aristotelis) are coastal bottom diving sea birds that belong to the cormorant family. The species nest in colonies along the coasts of western Eurasia and North Africa, including in Norway. The species is viable according to the IUCN’s Red List. 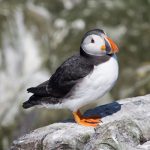 Puffins are any of three small species of alcids (auks) in the bird genus Fratercula with a brightly coloured beak during the breeding season. These are pelagic seabirds that feed primarily by diving in the water. They breed in large colonies on coastal cliffs or offshore islands, nesting in crevices among rocks or in burrows in the soil. Two species, the tufted puffin and horned puffin, are found in the North Pacific Ocean, while the Atlantic puffin is found in the North Atlantic Ocean.

The species was considered viable on the IUCN’s red list from 2017, but the European population has experienced a sharp decline (50–79%) over the past three generations (65 years). The classification has therefore been lifted to a strong threat in Europe and vulnerable to the international red list.

The scientific name of the species is sometimes misleadingly translated into «Arctic little brother». Rather, it means «little Arctic brother (in the sense of a believer in the monastery)», which probably refers to the black and white plumage that can remind monk cutters.

The puffin’s heavy dyeing in the breeding season has given the species the descriptive designation of sea parrot. 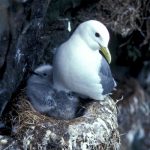 The kittiwakes (Rissa tridactyla) are pelagic surfacing seabirds belonging to the group of seagulls and one of two species in the genus Rissa.

The species nest in colonies in steep mountain ranges along the Atlantic and Pacific coasts of Eurasia and North America. In Europe, it nestles from Portugal in the south to Svalbard in the north. The largest crutch colonies in Norway are (from east to west) Hornøya, Syltefjordstauran, Sværholtklubben, Hjelmsøy, Røst, Værøy and Runde. The winter is spent on the sea, scattered throughout much of the North Atlantic.

Seagulls is a subfamily that consists of relatively small to fairly large coastal and pelagic surface-bearing seabirds.

These are birds that typically have long wings, powerful beaks, feet with swimsuits between the toes, and a generally rounded tail. 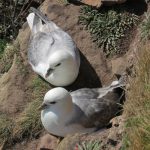 The Fulmar(Norwegian: «Havhest«, Danish: «Mallemuk«, Swedish: «Stormfågel«) is a pelagic surface-bearing seabird that belongs to the group of birds of prey. The species nest in Norway. It is similar to seagulls, but is not closely related to them. The fulmar is approx. 48 cm long, weighing approx. 750 g and has a wingspan of 101–117 cm.

The closely related southern fulmar is somewhat larger and has a wing span of 115–120 cm. 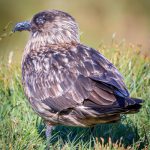 The Skua bird is a large and powerful bird and the largest of the Skuas. The Skua bird can, in flush memory, be reminiscent of a large gull, but it is completely dark with a marked white field at the base of the crank springs both on the top and bottom of the wings.

The skua bird only occurs in the Northeast Atlantic and thus has a very limited breeding spread. It nestles from the northern parts of the British Isles to the Faroe Islands, Iceland, Norway with Svalbard and Northwest Russia (the Russian part of the Barents Sea). The skua bird was first found nesting on Bjørnøya in 1970 and on Spitsbergen in 1976. The stock has since grown sharply. 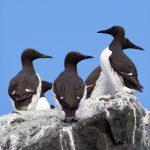 The Razorbill is a pelagic diving seabird in the group of auks, a monophyletic group in the family of razorbillss. The species nest in temperate, boreal and low arctic coastal areas of the North Atlantic. 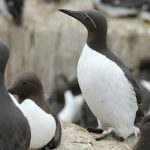 Guillemots are pelagic diving seabirds and the largest of the aukss, a monophyletic group belonging to the family of razorbills. The species is found in temperate and low-arctic coastal areas in the northern areas of the Atlantic and Pacific. 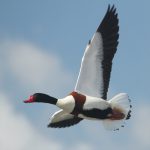 In 2016 Gravand was named Bird of the Year by the Norwegian Ornithological Association and is considered a short-haul migratory bird.

The Mallards belong to the genus Anas in the tribal grasslands. These are traditional ends that are included as a subfamily in the duck family. 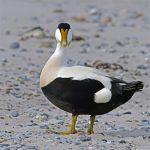 The Eider belongs to the group of coastal diverging seabirds and is a large fisherman in the duck family. In Northern Norway, it has been so common that it is often regarded as «domestic bird», and the species is the largest duck species in Norway. Six subspecies are normally recognized.
Source: Wikipedia 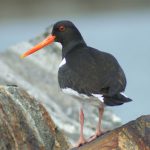 The Oystercatcher is a spring-associated bird species belonging to the tents family and is considered a short-haul migratory bird. The Oustercatcher is a character bird for coastal areas around Europe.

The largest concentrations of Oystercatchers in Europe are found in the Wadden Sea on the North Sea and in adjacent land regions.
Source: Wikipedia

A favorite place for photographers

The bird life at Runde attracts interest both domestic and abroad, and every year countless nature photographers come to the island. – The fearless puffins are willing to depict. Likewise, the gulls, which at times can be a bit on the go, hoping to get some occasional treat.

From far and near, both professional photographers and hobby photographers come to Runde to capture the bird life on the camera lens. The pictures to the right are taken by my former colleague, Arild Lillebø from Ulsteinvik. Ulsteinvik is the neighboring municipality of Herøy (Runde).

Arild is an enthusiastic and skilled hobby photographer. He has succeeded in photographing the diversity of bird species that nest on Runde. If you are just patient enough and take the birds into consideration so they don’t get scared, you can get close to them and get fairly good pictures.

The pictures in the top row, where a skua bird attacks a gannet, are special, showing the birds’ natural struggle for existence.

Personally, I do not get the opportunity to go around and take pictures, as I have to prioritize bringing tourists safely around Runde in the boat. I am therefore very grateful to receive so many pictures showing the diversity of species Runde has to offer.

Birds of Prey at Runde 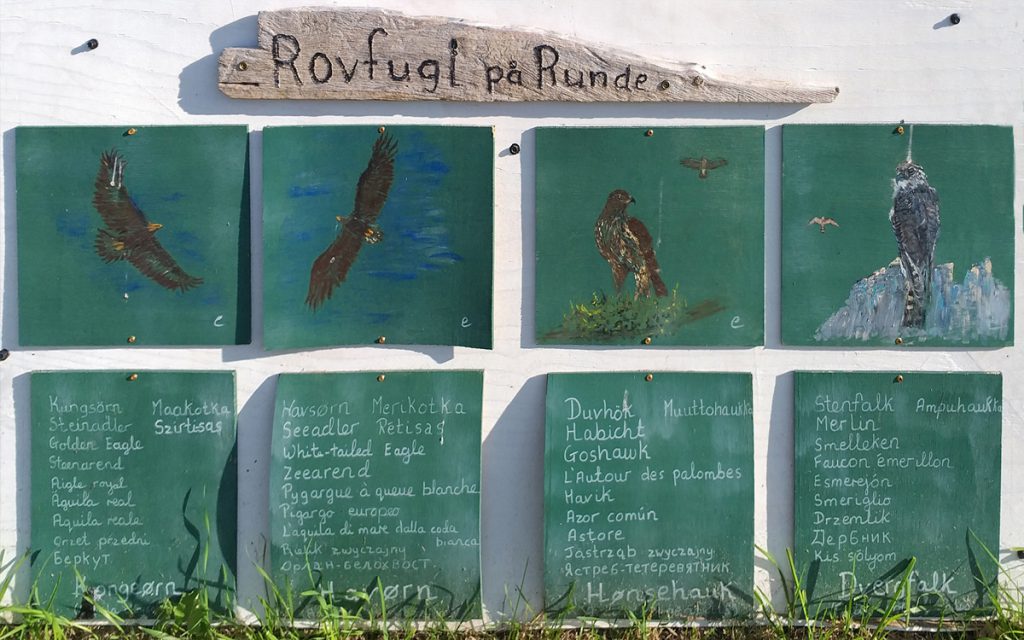 As the picture shows, some birds of prey have also settled at Runde. Here are Golden eagles, sea eagles, hawk, pilgrim falcon and stone falcon. My friend and colleague, Arild Lillebø, has succeeded in taking a great picture of the sea eagle, which floats on wide wings over the landscape. – The sea eagle is often seen at Runde.

Sea eagles are Northern Europe’s largest birds of prey and the fourth largest eagle in the world. It is a top consumer in its ecosystem and lives primarily on fish and seabirds, as it captures the surface. 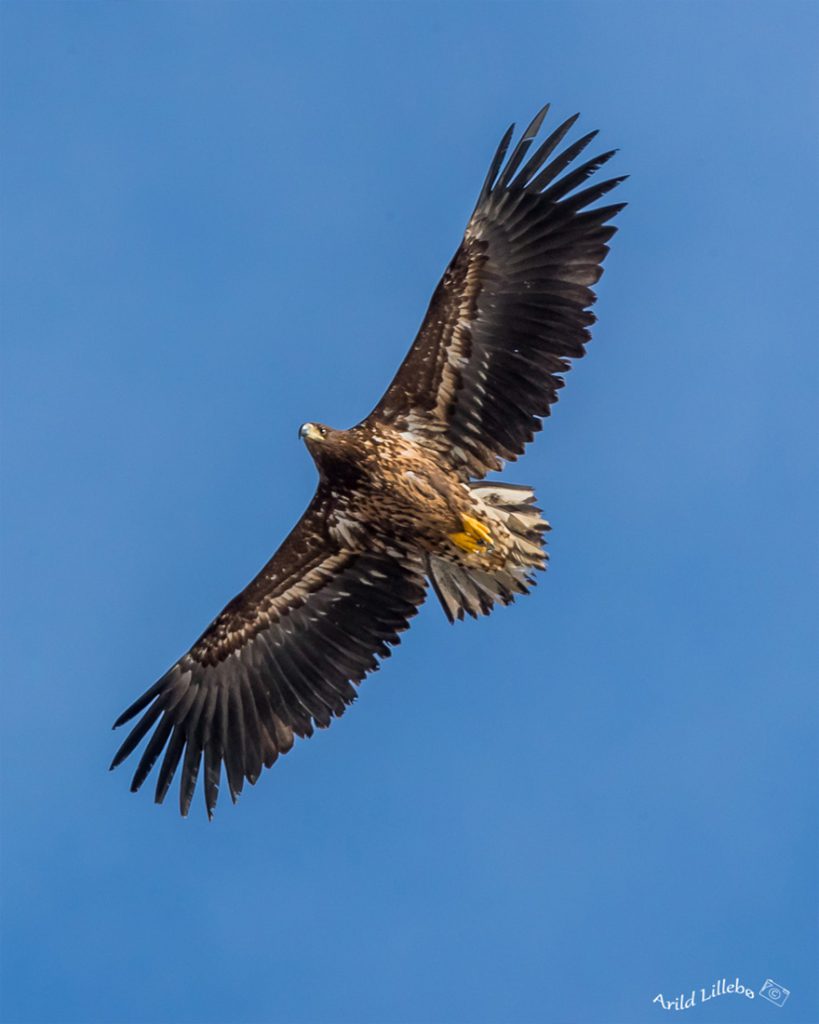 Threats to the bird life at Runde

Every year, hundreds of thousands of birds come to Runde during the breeding season. The steep Mountain side one gets full of birds and the bird nests are close. But if you look closely, you will see that there are also clear elements of blue, green and orange plastic pieces. The garbage is about to take over the bird cliff.

«– This is not the way it is supposed to be. We prefer to see nests that are made of natural material. When you see the colors in the mountain, it is a clear sign that something is wrong, » says the researcher and project manager for NTNU Circular Ocean, Dina Margrethe Aspen.

Source: NRK Møre & Romsdal.
In the NRK-article you can also see a number of pictures of the nests, and how artificial material is increasingly used for nesting, which represents a great danger to the birds. The pictures are taken by photographer HÅVARD JANGAARD STRAND / NRK.
Please note that all pictures in the article are protected under the Act of Copyright. 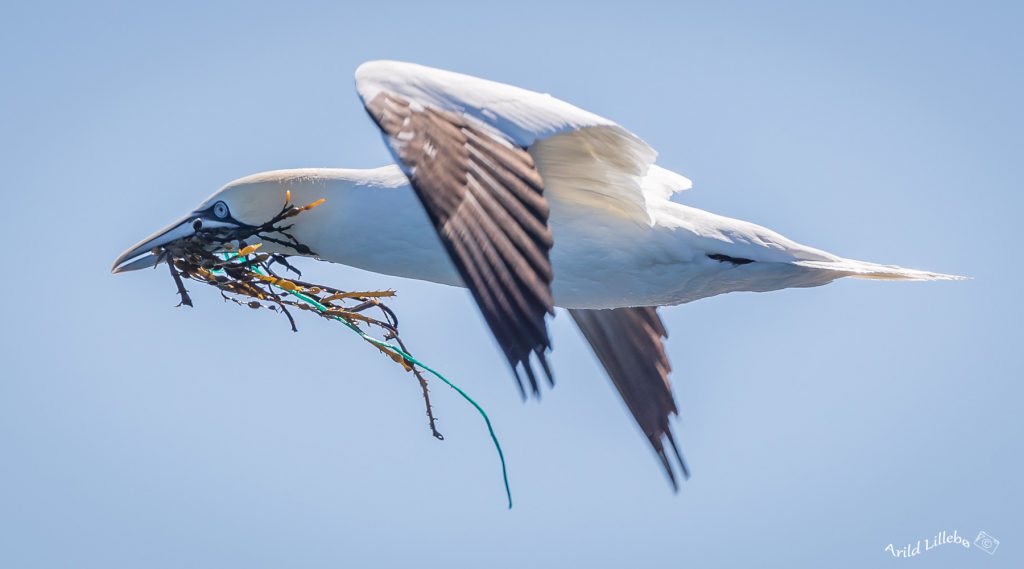 The picture above is taken by photographer Arild Lillebø, and shows a gannet that collects material for nesting. Among seaweed and kelp is nylon rope. 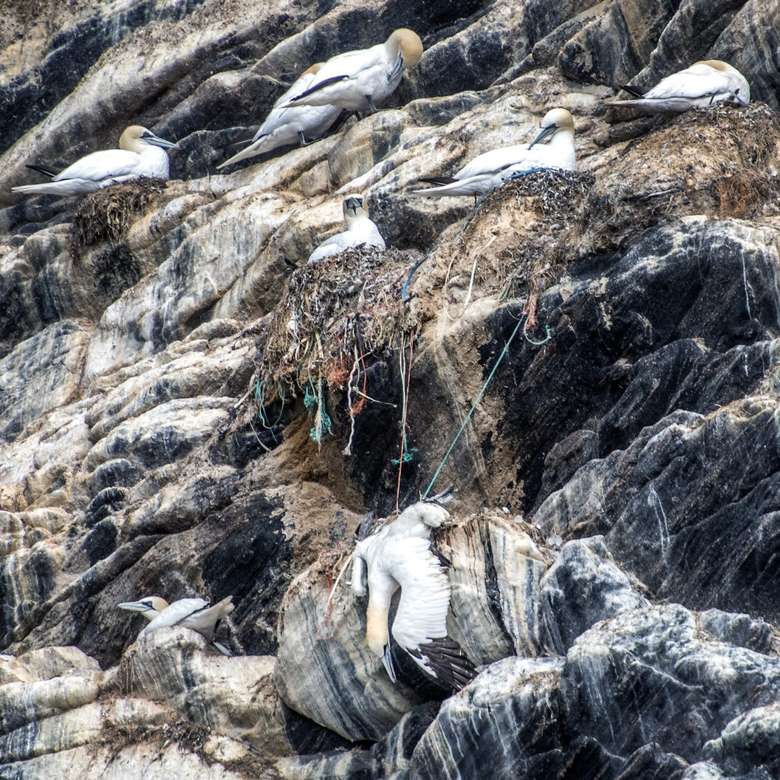 The picture above is taken by, Staale Wattøy (photographer at Sunnmørsposten), and shows a dead gannet that has been stuck in the nylon rope. The picture is a great reminder of the danger the plastic and nylon litter represent for the birds at Runde.

In 2018 the photographer, Staale Wattøy was given a prize for the image of the dead sea sole.
Please note that the picture is protected by the Act of Copyright.

300,000 seabirds have disappeared from Runde

«– This is some of the most dramatic events that has happened to the Norwegian nature that we are aware of, says the general manager at Runde Miljøsenter, Nils-Roar Hareide.

«– Changes in the stock indicate that there are huge, dramatic, ecological processes. The seabirds disappear, and we do not know why.

This happens all over the North Atlantic and many conclude that it must be due to climate changes.

Temperature, wind and electricity hav an impact on the sea conditions. Oceanography is absolutely crucial for the birds and other marine life. Lower temperatures or salinity on the sea surface can cause the food of the seabird to go deep and then it can be difficult for the birds to pick it up. We face major challenges when it comes to what is happening in the bird cliff,« says Hareide.

Source: Sunnmørsposten.
The whole article can be read here.