Boattrip to the Runde bird cliffs

The bird life and the harsh coast

Boattrip to the Bird Cliffs

A boat trip with Aquila is very popular amongst visitors to Runde.
I – Johan – am employed as captain and guide, a job I enjoy very much.
I was born and raised by the seaside, and have made use of boat as a means of transport since early childhood, when there was no bridge connection between the islands of the coastal municipality of Herøy. We were thus dependent on boat to travel from one island to the other.

For a number of years, AQUILA has been my faithful companion and partner at Runde, and over the years she has safely transported quite a large number of passengers around the island; to the bird cliffs, into the caves – and then safely back to Runde harbour. 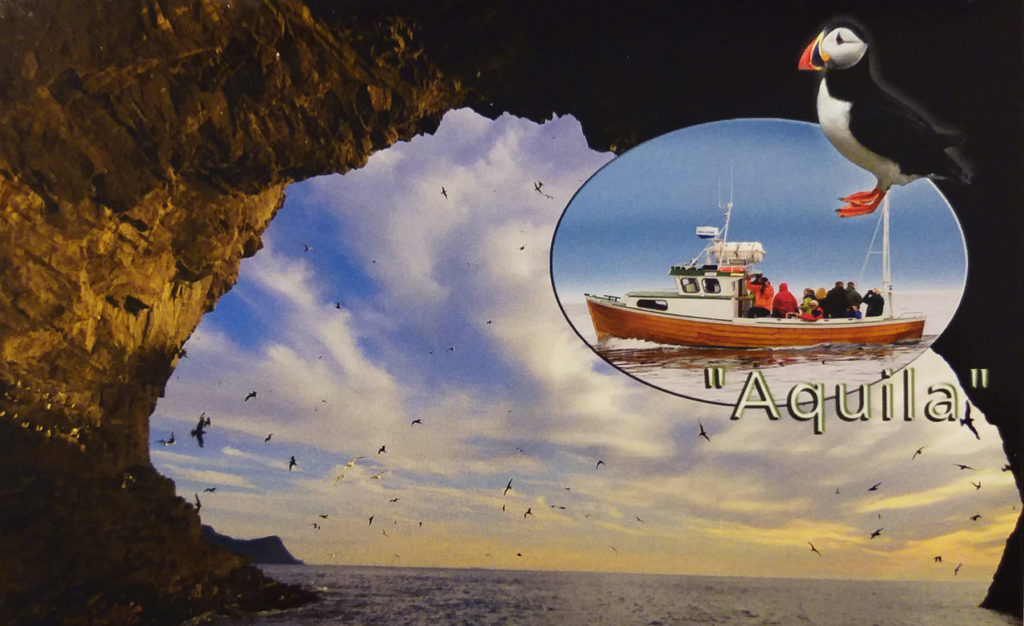 Practical information about the boat trip

No boattrips to the Bird Mountain in the Summer of 2020

Due to the Government’s Distance Restrictions it will not be possible to arrange trips with Aquila to Runde Bird Mountain the Summer of 2020.

The duration of the boat trip is a little less than two hours.

NB! In June and July Aquila will not offer bird-watching tours on Thursdays.

Aquila can take 12 passengers on every trip.

Booked tickets are collected and paid in the kiosk at Goksøyr Camping.

NB! In June and July Aquila will not offer bird-watching tours on Thursdays.

Safety Equipment on board Aquila

Aquila has complete rescue equipment on board, such as life jackets for children / adults, as well as life raft.

The season starts May 1 and lasts until September 1.

It is at this time there are most tourists at Runde, both from the district and from other places in Norway. – Not least, Runde is a very popular holiday resort among Germans, Dutch and Belgians. – The season is therefore in the most popular holiday months.

The boat trip starts from Runde harbour, goes west, around Måganeset, where The Bird Cliffs, with Rundebranden and Lundeura come into view. The bird mountain at Runde is home to 100 – 150,000 birds, including puffins, gannets, kittiwakes, razorbills and guillemots. In Lundeura, the popular puffins have their nests. On the evening tour (departure at 19:00), the charming puffins have finished the work session of the day; a trip out to the ocean to find food – and huge amounts of birds enjoy an evening bath below Lundeura.

After getting acquainted with the puffins, we go to Skarveskjæret, where a couple dozen cormorants are staying. – Then we go to the steep cliff that makes home for the remains of the former huge colony of kittiwakes, who build their nests on small ledges in the steep mountain.

In 1946, the first gannet couple established themselves in the bird cliff, and since that time the population has constantly increased, and today (2019) the gannets count approx. 5,000 pairs. The gannets have taken over the former nesting places of the kittiwakes. The kittywake colony has become very reduced.

The coast at Runde is harsh, with countless underwater reefs. In order to travel by boat around Runde, one needs to have good knowledge of where all the reefs are located.

– If the weather is nice, we will also take Aquila into one of the large caves, of which there are several in the bird cliffs. A popular experience among the tourists.

The puffin – or “Sea Parrot” it is also called because of its characteristic appearance – is today on The National Red List, and is considered very vulnerable.

The puffin goes far out to the Atlantic Ocean in the autumn and stays there most of the wintertime. In the spring (March), it comes to Bird Mountain to nest. Tens of thousands of birds live together in large colonies, and the bird cliffs by the sea are lively. The puffins that live in the cliffs are well protected from predators. But the puffins that nest in the grasshacks are prone to attacks by  mink and birds of prey.

Each pair of puffins only lays one egg, and after six weeks, the baby bird is fully capable of flying and independent of its parents. After it has left the nest, it does not return to the coast in a few years. When the puffins return, they return to exactly the same area.

The puffin lives mostly on fish, crayfish and mussels – and can dive down to more than 30 meters when looking for food.

Video from the roundtrip with Aquila

Runde Boattrip has received a video from Mikael Ekelund (Mik Swe) – a talented Swedish nature photographer – he has filmed on one of the trips with Aquila. Mikael Ekelund has been to Runde several times, and I hope to have him as a passenger at Aquila also in the future. I am very grateful that I have been authorized to show his video on my website.

Please note that both the video and the pictures on my homepage are subject to The Copyright Act.

After the visit to Bird Cliffs and the caves, the trip continues around the island, we pass Runde Lighthouse, then Goksøyra, where the campsite is located. In Goksøyra you will find the hiking trail up to Rundebranden, Lundeura and to Runde Lighthouse.

The sea gulls know when Aquila is expected to arrive – they hope for a delicacy – and they usually follow the tour company until everyone is safely brought to Runde harbour, hopefully filled with many good memories from the boat trip.

Hold tightly on the hat!